Food and cuisine is a key part of the San Fermin fiestas. The Peñas (San Fermin social societies), groups of friends, culinary societies or simply friends and visitors gather around the table to enjoy the traditional Navarre dishes, such as bull stew, Ajoarriero (salt cod in tomato, garlic and pepper sauce), a good portion of fresh white beans, Chistorra (fresh garlic sausage), stuffed peppers, asparagus, and ham in tomato sauce, all cooked with fresh produce grown in the Navarre market gardens and the best meat, washed down with Navarre wine, which now enjoys international recognition. The Pamplona program of fiestas includes many different acts and events which would be unthinkable without the accompanying culinary rituals. The Dianas (early morning reveille to musical bands) with hot broth served to participants; Churros (long fried doughtnuts) and hot chocolate after the bull run; the procession of the Giants followed by snacks of Chistorra, small earthenware dish servings and select tapas; lunch before the parade of the mules, before going to the bullring and enjoying an afternoon snack with the Peñas in the seats in the sun; the Firework display before or after a good supper. In short, nine days of revelry and fun, accompanied by good cuisine.

In Navarre, food is present in every important social event, as an essential part of the celebration. This is a deep-rooted tradition in Navarre, and here Pamplona is no exception. The city offers all types of typical Navarre dishes and regional produce. A whole range of food can be found in the bars and restaurants, from sandwiches and signature tapas to a menu prepared with the tastiest of dishes. Something for all tastes and budgets. Although during the San Fermin fiestas, prices are inevitably higher.

A recommended tradition is to go to the Old Part and sample the tapas together with a Tinto (red wine), Claro (rosé wine), vermouth or beer to quench your thirst during these hot July mornings. You can also enjoy the traditional "poteo" (bar hopping) during the evening and the San Fermin nightlife. If you're looking for a more select atmosphere, in the Plaza del Castillo square there are emblematic places such as the Café Iruña, or, still in the Old part, the haute-cuisine restaurants such as the one run by the Hartza sisters, or the Europa, in street Espoz y Mina, or Don Pablo in Navas de Tolosa street or La Olla, in the Av. Roncesvalles. Alongside the bullring, there is the Rodero restaurant, and in the Ensanche (city extension), the Alhambra restaurant in the Bergamín strret and the Josetxo restaurant in Príncipe de Viana. 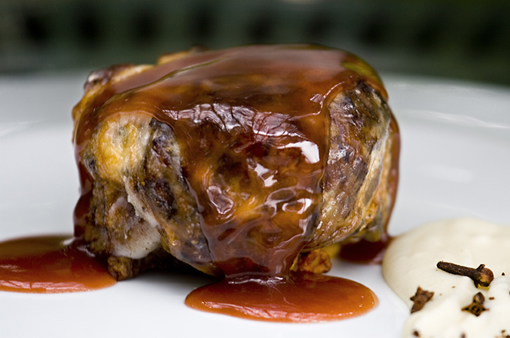 More affordable prices in the San Fermin fiestas are to be found at the San Fermin, Amóstegui and La Chistera Restaurants, all offering Navarre cuisine. Special mention should be made of the Mesón del Caballo Blanca, due to its privileged location on the city's ramparts where, just a short distance from the heart of the fiestas, you can enjoy the peace and tranquillity and the magic of a spot reminiscent of medieval times and affording some magnificent views of the surrounding area. The Asadores (carveries) specialise in char-grilled meat and fish, in addition to many other different dishes.

As a piece of general advice, when looking for somewhere for lunch or an evening meal, it's best to stay calm and remember that, during the fiestas, there are likely to be crowds of people everywhere. In order to meet this demand, many establishments offer lunch until 3 pm and evening meals until midnight. Weekends are the busiest. 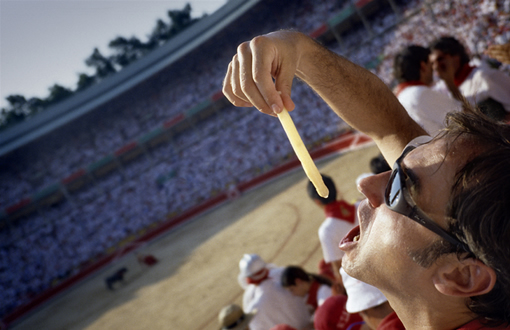 The love of food here in Navarre is evident in the many different culinary societies which are constantly being formed. This enjoyment of good food is particularly noticeable in the San Fermin fiestas amongst the society members who gather together to enjoy a wide range of Navarre dishes.

A day in the fiestas typically starts with a warming cup of hot Caldico (broth), made with veal and chicken and which is given out in front of the Town Hall at 6 am just before the Dianas (early morning reveille). After the bull run, runners and spectators alike get their strength back after the running and early morning rise with a cup of hot chocolate accompanied with Churros (long fried doughnuts). These can typically be found in any of the cafeterias along the Estafeta street of in the Plaza del Castillo square. The Churrería Mañueta located in the Mañueta street, close to the Town Hall, are particularly renowned. Mid-morning, after watching the procession of San Fermin or the Giants, is a good time for a snack and for stopping at one of the bars close to the Cathedral or Town Hall for some snacks such as ham with tomato or fried eggs, Chistorra and peppers stuffed with cod. Also popular are Cazuelicas (small earthenware dishes) of ham in tomato sauce, Ajoarriero or sweetbreads, as an appetizer. The Meriendas or afternoon snack in the bullring, organised by the Peñas in the seats in the sun are a good example of the local homemade cuisine. For lunch, there is a tremendous variety of local dishes. Hearty dishes such as fresh white beans, or lighter ones such as asparagus or mixed vegetables, followed by lamb sweetbreads, tuna in tomato sauce, trout with ham, ham with tomato, bull stew, lamb in pepper sauce, T bone steaks, hake fried in sizzling oil, lamb shanks. For dessert, there are cheeses, junkets, cream horns, Roncal cheese, creamy custard, milk fritters or a type of sponge called Goshua made with confectioner's custard. To end the meal, a good Pacharan (aniseed drink made with bilberries) which has digestive properties. In short, a traditional cuisine of prestige which has put Pamplona on an international level.