At ten o'clock in the evening, the children have their own special bull run. Following the same route taken in the morning, a firework bull leaves the Plaza de Santiago square, just behind the Town Hall, to pursue a crowd of children who defy it and urge it on. This spectacle of light and powder is created by a wood and paper mâche structure, resembling a bull, with rockets and fireworks pinned to its sides. The "bull" is carried on the shoulders of a young man, who runs through the streets of the Old Part until all the fireworks have gone out.

The firework bull is an age-old spectacle, which is already mentioned in the Bull Chronicles of the 17th century. At that time, the rockets were actually mounted on the animal's sides. Due to the cruelty involved, the bull-like structure used today was finally created. 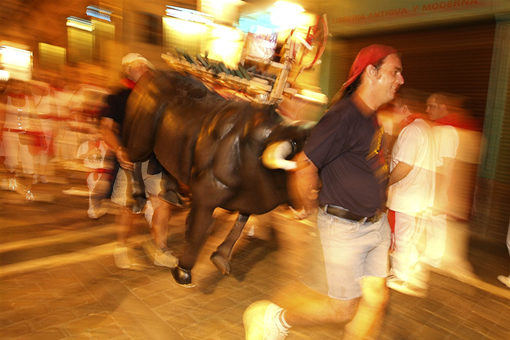 A rocket is fired to signal the start of the first of the two firework bulls which pursue children and teenagers through the streets for just over half an hour. The children, accompanied by their parents, run out in front of the bull, which gives off sparks, many-coloured fireworks and firecrackers as it runs from the Town Hall square to half-way up the street of Estafeta. At that point, after a second rocket has been fired, another lad takes over and continues the route as far as the Telefonica building.

This event is virtually risk-free given the fact that cold fireworks are used which do not burn. However, you are recommended not to touch the paper mâche bull, or lean against it, as the person carrying the "bull" has a 30 kg load on his shoulders, which is no mean feat.