The firework display is put on every night at 11 pm and can be seen from a number of places in Pamplona. Pyrotechnic experts set off collections of multi-coloured lights from the moat in the Citadel (Ciudadela).

This exhibition of fire, light and sound marks the start of the San Fermin night festivities. Thousands of spectators watch in delight as the colourful displays fill the sky, a time for relaxing before going on to enjoy the nightlife at the open-air dances and in the city's bars. This is the moment chosen by groups of friends to meet up again and start the fiesta.

Thousands of people sit on the grass in the park around the Citadel to comfortably watch the firework collection. Others arriving at the last minute, or later on, gather in the nearby streets, not wishing to miss the plastic beauty of this dazzling open-air show. Just before the display begins, the nearby street lamps are switched off in order to better appreciate the colour and effects of the fireworks in the darkness of the night.

Each night the best firework professionals put every effort into offering the most sophisticated pyrotechnic effects yet created, forming figures such as garlands, glow worms, palms, bouquets with shells of bright, daring colours, in compositions at different heights. The display is paced to last almost half an hour, with a spectacular grand finale. The stunning show put on by the firework experts, the conveniently located site and the magic of the night make this a not-to-be-missed event. 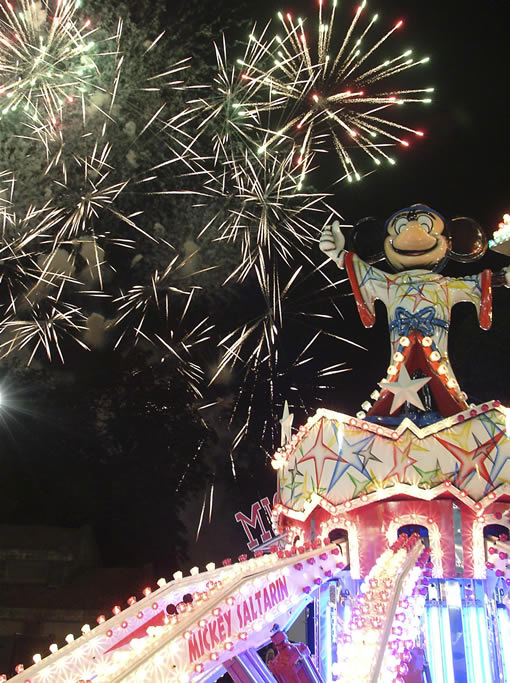 Fireworks have always been present in the San Fermin fiestas. Since 1595, when the fiesta program was much more modest than the present-day one, fireworks were included as one of the key acts. From that year onwards, except on rare occasions, firework displays have been put on year after year. Now in the 21st century, the displays include many innovations such as digital technology to direct the shells, and novel colours. This event was declared to be an international contest from the year 2000 onwards, with a jury and prizes. As a result, the best European pyrotechnic teams come to Pamplona to take part in the contest, producing some stunning displays and improving the quality of the exhibition still further.

The best place to watch the fireworks is unquestionably the large stretch of grass in the area surrounding the citadel, the emblematic enclosure in the Vuelta del Castillo. Its best to bring a blanket or something to sit on, picnic style, as the ground can be damp. A jacket or something warm to wear is also a good idea, as the weather can easily change in Navarre. If you don't come early enough to get a good place, you can watch the display from the Avenida del Ejército avenue and the streets adjoining the Plaza de los Fueros square. Other good sites are the Paseo de Sarasate in the centre and Plaza de la Paz square, although the lower fireworks and the cascades of light streaming down the Citadel walls cannot be seen from there. Bring something to eat and drink whilst sitting on the grass and watching the display, which is what most people do. However please be aware that it is forbidden to enter the area immediately around the fireworks, which is fenced off by the City Council, as there is a danger of firework debris and sticks falling in this zone. In short, the best seats to be found are in the Vuelta del Castillo park with its soft grass, giving you a chance to rest a while and enjoy the display before continuing with the fiestas.