The San Fermin fiestas owe much of their international fame to the writings of the North American journalist, Ernest Hemingway, on his experiences in the Pamplona fiestas. Hemingway describes detailed aspects of these celebrations in various newspaper articles and, above all, in the internationally acclaimed novel "Fiesta". Many have followed in his footsteps, in this festive pilgrimage; anonymous visitors from a number of countries, right up to international leaders seduced by the magic of his stories, such as Bill Clinton who got lost in the crowd during the fiestas here in his youth. In addition to politicians, a number of international personalities from the arts and culture, including musicians, writers and famous film directors have also visited the fiestas. Before Hemingway's arrival, the San Fermin fiestas were simply celebrated by the locals. However, after the nineteen twenties, visitors from other countries flocked to Pamplona, attracted by the fame of the bull running and by the magic of each of the acts in honour of St Fermin.

Ernest Hemingway first came to Pamplona on 6th July 1923, accompanied by his wife Hadley Richardson, sent by the North American weekly he worked for, to cover the fiestas. His experience was so pleasant and powerful that, as a writer, he felt the need to write it down in what was to be his first successful novel "The Sun Also Rises" (Fiesta), which was published 3 years' later. This was not the only time Hemingway visited Pamplona; the festive atmosphere of the San Fermin fiestas and his love of bullfighting led him to return on 8 further occasions, the last one being in 1959, two years before he committed suicide in Idaho.

In his stories on the San Fermin fiestas, the writer reveals the streets and spots of the Old part of the city. From the Hotel La Perla, where he generally stayed, Hemingway was a privileged spectator of the comings and goings of absent minded tourists, groups of young people, drunk from the fiesta, and an endless line of protagonists in the whirlwind activities of the fiestas, in a Pamplona at the beginning of the century. The Plaza del Castillo square became the hub of the literary production on this theme. In addition to La Perla, many more establishments frequented by Hemingway are located in the square, such as the Txoko bar, the Hotel Yoldi and the café Iruña.

In the years to follow and right up to the Spanish Civil War, the writer's visits to Pamplona, after his personal discovery of the San Fermin fiestas, were practically constant. During this period he visited Pamplona on seven different occasions, the last one being in 1931. During the civil war, he actively participated on the side of the Spanish Republic. He was then not to return until after the second world war, in 1953 and then finally in 1959. During his stays in Pamplona, Hemingway was no mere onlooker, but actively took part in the fiestas, getting the most out of them, as could only be expected given his passionate and intensely vital temperament. 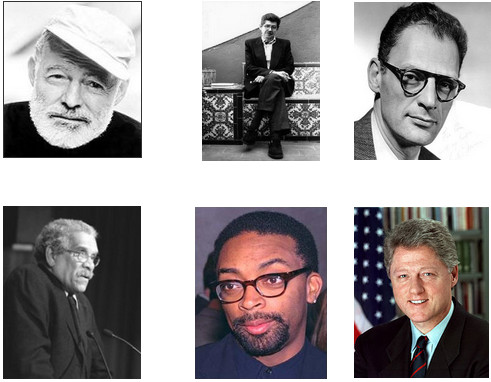 He who formed part of the so-called "lost generation" was an Aficionado of the world of bulls, to such an extent that he actually ran in front of the bulls, also with a few encounters with the fighting cows released into the bullring in the morning. He was known to be on friendly terms with some of the famous bullfighters of the time, such as Antonio Ordóñez and fighters from Pamplona such as Juanito Quintana. A lover of Navarre cuisine, he discovered such typical dishes as the Ajoarriero (salt cod in tomato and pepper sauce) and enjoyed the wines of Navarre, whilst chatting on the terraces. He took part in the revelries, the gaiety and euphoria of the San Fermin fiestas, whilst also experiencing the tragedies, witnessing in 1924 the first death of a runner along the route: Esteban Domeño, a 22 year old lad. Hemingway included this event in two of his books: “Fiesta” and "Death in the Afternoon", written in 1932.

A monument to his work and figure stands alongside the Bull Ring, a token of the appreciation and recognition of this capital city of Navarre. The Council of Pamplona inaugurated this sculpture, the work of Luís Sanguino, on 6th July 1968, with the presence of Hemingway's last wife, Mary Welsh. It stands in the Hemingway Walk and bears the following dedication: "To Ernest Hemingway, Nobel Prize for Literature, friend of this land and an admirer of its fiestas, who knew how to discover and spread the word. The City of Pamplona, San Fermin. 1968."

The North American novelist masterly transmitted the very soul of the Pamplona fiestas, to the world as a whole. His legacy has gone beyond frontiers and has been understood by readers from around the world. From Hemingway's time onwards, the adventures of the San Fermin fiestas have been shared by thousands of foreign tourists, seeking to recapture the emotions underlying his work.

Many famous people have come to Pamplona, influenced by the passion with which Hemingway enjoyed the fiestas, and which he so clearly described in his stories. In 1956 the film version of “Fiesta" was shot by Henry King the film director, with a cast of famous actors formed by Ava Gadner, Errol Flynn and Tyrone Power. In those years, various figures from the North American film industry visited Pamplona, such as the actor and director Orson Welles, the actress Ava Gadner and Deborah Kerr, the actor Charlton Heston, the dramatist Arthur Miller with his wife, the Austrian photographer Inger Morath. More recently, the writer's granddaughter, Margeaux Hemingway, Alfredo Bryce Echenique, Derek Walcott the Nobel Prize winner from the Antilles, and the film director Spike Lee. Not always from the film world, also from other cultural areas, with illustrious visitors such as Matt Carney, who became a great runner in the Encierro together with his friend and master, Jerónimo Echagüe; Alice Hall, Joe Disler, David Black, who has been 40 times; Ray Morton and a young Bill Clinton. In his book "The drifters", the writer James Michener covers the presence of all these people in San Fermin.

His experiences, his writings and the impression he left amongst the inhabitants of Pamplona during those years, have gone beyond a mere photographic description of the history of the fiestas and the social reality of the time. Hemingway himself has become a point of interest in the city, to the same extent or even more so than any of the monuments or most important events of Pamplona. Visitors recognise the presence of the writer in each of the spots he described in his work, on the terraces and in the rooms of the mythical Café Iruña, the bar Txoko or the Windsor Pub, the former Tormo. Some of these places still conserve the charm of that period. Other legendary places no longer exist today. The first to disappear as such was the Hotel Quintana, although the building still stands in one corner of the Plaza del Castillo square, opposite La Perla. Neither does the Casa Marceliano tavern, which closed its doors just a few years' ago, whose place is now occupied by some municipal offices; the same is true of the Café Kutz which is now a bank. And, in 1952 the hundred year old Café Suizo closed.